Normally, Java programmers are not too concerned about the hardware on which their beautiful software runs as long as provides loads of memory. Most of the time this is a good thing as software should solve a business problem rather than satisfying a machine. The JVM does a decent job hiding the underlying platform but as we know, abstractions are leaky. Sometimes we have to peek under hood, especially when we’re concerned about performance. One such topic is false sharing, were a very performance-critical component might not perform as well as we’d expect.

CPUs don’t care about classes or objects; they are concerned with reads and writes on memory cells. To efficiently operate on data, it is fetched from main memory into a CPU cache at the granularity of a cache line. A cache line is a block of memory in the CPU cache, say 64 bytes. If data in a cache line is modified, each core sends messages across the memory bus according to a well-defined cache coherence protocol (the most common one being the MESI protocol) so all cores can reconcile.

Core0 knows that it does not own the cache line “n” exclusively, so it has to broadcast an “Invalidate” message across the bus after changing the cache line to notify other cores that their caches are stale. Core1 is listening on the bus and invalidates the corresponding cache line. Consequently, this produces a lot of unnecessary bus traffic although both cores operate on different fields. This phenomenon is known as false sharing.

This is a rather unsatisfying state of affairs: Although each thread operates on different fields, we produce a lot of unnecessary bus traffic which is ultimately caused by the memory layout of our Java objects. If we were able to influence the memory layout we can avoid false sharing. It turns out there are a few ways around this problem. A word of warning though: The following techniques depend on the JVM implementation or the underlying hardware so take my words with a grain of salt. The techniques are taken from the JMH example class JMHSample_22_FalseSharing and a presentation on @Contended which inspired me to write this blog post. I’ll just describe three of them shortly here as the example class of JMH documents these and more techniques already very clearly: 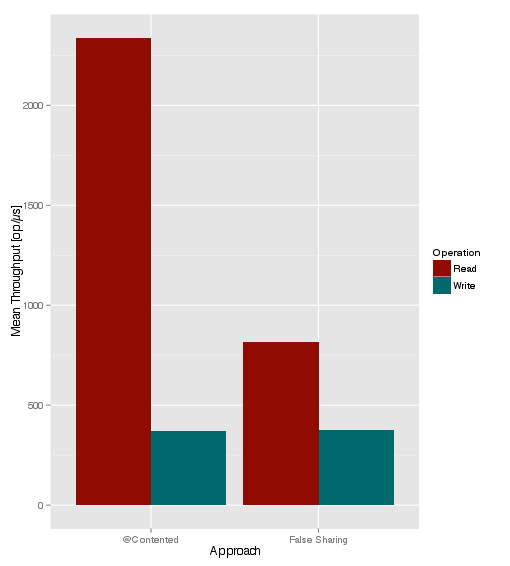 However, don’t worry: @Contended is definitely not meant to be sprinkled across the entire codebase. In fact, it should be used very, very sparingly and people wanting to use @Contended probably already use one of the previously-mentioned field padding approaches. In JDK 8, @Contended is just used in 5 classes (Thread, Striped64, ConcurrentHashMap, Exchanger and ForkJoinPool). There are limited circumstances where false sharing is really a problem and bottlenecks should be identified before-hand. But that may be the topic of another article some day…