In the previous post, I have introduced JMH with a Hello World benchmark. Now, let’s dig a bit deeper to find out more about the capabilities of JMH.

In this blog post, we’ll implement a microbenchmark that compares the multithreaded performance of different date formatting approaches in Java. In this microbenchmark, we can exercise more features of JMH than just in a Hello World example. There are three contenders:

Phew, that’s quite a bit to chew on. So let’s tackle the challenge step by step.

Let’s start with the metric that we want to determine. JMH defines the output metric in the enum Mode. As the Javadoc of Mode is already quite detailed, I won’t duplicate the information here. After we’ve looked at the options, we choose Mode.AverageTime as benchmark mode. We can specify the benchmark mode on the benchmark class using @BenchmarkMode(Mode.AverageTime). Additionally, we want the output time unit to be µs.

When the microbenchmark is run, results will be reported as µs/op, i.e. how many µs one invocation of the benchmark method took. Let’s move on.

We defined holder classes for each Format implementation. That’s needed, as we need a place to put the @State annotation. Later on, we can have JMH inject instances of these classes to benchmark methods. Additionally, JMH will ensure that instances have a proper scope. Note that SyncJdkDateFormatHolder achieves thread-safety by defining #format() as synchronized. Now we’re almost there; only the actual benchmark code is missing.

As we did not specify anything, the method will run single-threaded. So let’s add the last missing piece:

With @Threads we can specify the number of benchmark threads. The actual benchmark code contains methods for each microbenchmark candidate for one, two, four and eight threads. It’s not particularly interesting to copy the whole benchmark code here, so just have a look at Github.

I’ve run the benchmark on my machine with an Intel Core i7-2635QM with 4 physical cores and Hyperthreading enabled. The results can be found below: 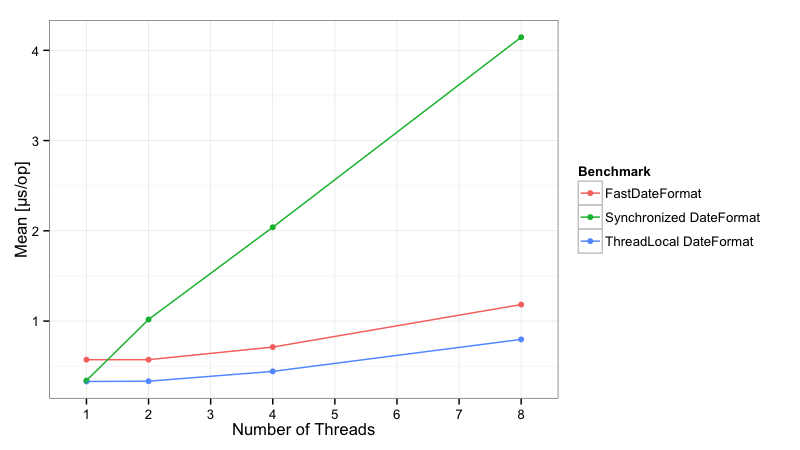 Apart from these features, JMH provides a lot more such as support for asymmetric microbenchmarks (think readers and writers), control on the behavior of the benchmark (How many VM forks are created? Which output formats should be used for reporting? How many warm-up iterations should be run?), etc. etc.. It also supports arcane features such as the possibility to control the certain aspects of compiler behavior with the @CompilerControl annotation, a Control class that allows to get information about state transitions in microbenchmarks, support for profilers and many more. Just have a look at the examples yourself, or look for usages of JMH in the wild, such as JCTools microbenchmarks from Nitsan Wakart, the benchmark suite of the Reactor project or Chris Vest’s XorShift microbenchmark.

Although writing correct microbenchmarks on the JVM is really hard, JMH helps to avoid many issues. It is written by experts on the OpenJDK team and solves issues you might not even knew you may have had in a handwritten benchmark, e.g. false sharing. JMH makes it much easier to write correct microbenchmarks without requiring an intimate knowledge of the JVM at the level of an engineer on the HotSpot team. JMH’s benefits are so compelling that you should never consider rolling your own handwritten microbenchmarks.